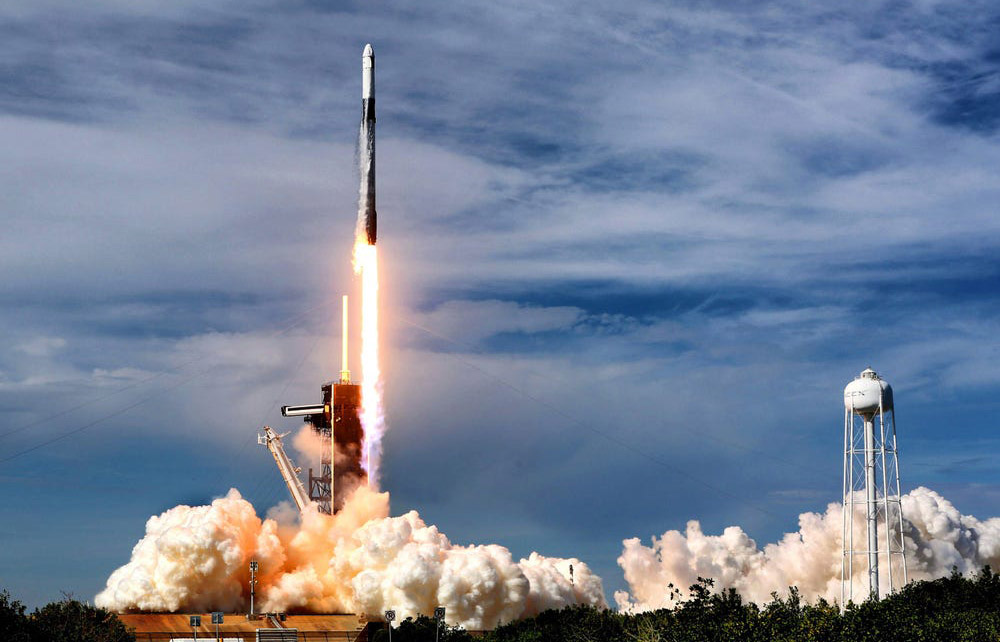 NASA astronauts Shane Kimbrough and Megan McArthur will be joined by French astronaut Thomas Pesquet of the European Space Agency, and Akihiko Hoshide from Japan. They're due to spend six months aboard the International Space Station after their Crew Dragon capsule docks early Saturday morning.
The Crew Dragon capsule, named "Endeavour," previously carried NASA's Robert Behnken and Douglas Hurley to the space station in May 2020. Endeavour soared into space atop a SpaceX Falcon 9 rocket that was also charred with soot from a previous mission it flew in November 2020. SpaceX has long made reusability a cornerstone of its business plan, hoping that recovering and refurbishing hardware will drive down the cost of spaceflight. Though the company has re-flown boosters and spacecraft dozens of times on satellite and cargo launches over the past several years, this will mark the first time the company will reuse hardware for a crewed mission.
After enjoying time at the beach Thursday and getting some sleep, the crew was at Florida's Kennedy Space Center (KSC) to suit up shortly after midnight. They then enjoyed handpicked playlists — one of which included tunes by Ozzy Osbourne, Foo Fighters and Metallica — inside the Teslas that drove them to the launch pad before they were whisked up the launch tower, and accessed the spacecraft via aerial walkway.
The astronauts spent hours being strapped into the capsule by a team of SpaceX helpers, and running through a series of communications and safety checks. The crew briefly kept themselves entertained during the checks by playing rounds of rock-paper-scissors, a superstitious tradition that all astronauts that launch out of KSC observe before flight.
From left are mission specialist Thomas Pesquet of the European Space Agency, pilot Megan McArthur and commander Shane Kimbrough of NASA, and mission specialist Akihiko Hoshide of the Japan Aerospace Exploration Agency.
Then, just before 6 am ET, the Falcon 9 rocket fired to life and propelled the spacecraft to more than 17,000 miles per hour before separating from the Crew Dragon spacecraft.
Enter your email to receive CNN's nightcap newsletter.
SpaceX also landed the first-stage rocket booter on a seafaring platform so that it can be used yet again on a later mission.
The Crew Dragon, meanwhile, is now hurtling through space. It'll remain freeflying through orbit as it gradually maneuvers closer to the ISS, which orbits about 250 miles above ground. It's slated to dock with the ISS around 5 am ET Saturday.
Kimbrough, McArthur, Pesquet, and Hoshide will join seven astronauts already on board the station, four of whom arrived on a SpaceX Crew Dragon capsule in November. That will bring the space station's total staff to 11 — one of the largest crews the ISS has ever hosted. But that number will quickly drop back down to seven when four other astronauts hitch a ride home from the station on April 28.
SpaceX wins $2.9 billion NASA contract for lunar lander
NASA has spent more than a decade working to boost staffing aboard the 21-year-old space station after the retirement of its Space Shuttle program in 2011 left Russia's Soyuz spacecraft as the only option for getting astronauts to and from the ISS. The United States had been paying Russia as much as $90 million per seat for those trips.
A SpaceX Falcon 9 rocket with the company's Crew Dragon spacecraft onboard is seen on the launch pad at Launch Complex 39A as preparations continue for the Crew-2 mission, Tuesday, April 20, 2021, at NASA's Kennedy Space Center in Florida.
For years, SpaceX worked under a $2.6 billion fixed-price contract to develop its Crew Dragon spacecraft under NASA's Commercial Crew program, which for the first time in space agency history handed over the task of building and testing a crew-worthy spacecraft to the private sector. SpaceX made history last May with the first crewed launch of a Crew Dragon on a mission called Demo-2, which carried NASA astronauts Douglas Hurley and Robert Behnken to the ISS for a four-month stay. A second crewed SpaceX mission took off in November.
(Boeing (BA) is working under a similar contract to develop its own capsule for the program, called Starliner, though it is still in the testing phase.)
A prime focus of the astronauts' mission will be to study "tissue chips," or "small models of human organs containing multiple cell types that behave much the same as they do in the body" and that NASA hopes will advance the development of drugs and vaccines, according to the space agency. That work will build on years of studying biological and other scientific phenomena aboard the ISS, where the microgravity environment can give scientists a better fundamental understanding of how something works.
McArthur is a Space Shuttle veteran and is married to Behnken, who co-piloted the historic Demo-2 mission last May. McArthur told reporters over the weekend that she was able to get "years of experience" with the Crew Dragon vehicle as Behnken worked alongside SpaceX during the Crew Dragon development process.
A SpaceX Falcon 9 rocket with the company's Crew Dragon spacecraft is rolled to Launch Complex 39A as preparations continue for the Crew-2 mission at NASA's Kennedy Space Center.
"I had several years, really, of learning from him along the way," McArthur, who will pilot the Crew-2 mission and holds a doctorate in oceanography, said.
McArthur will be joined by NASA's Kimbrough, a retired Army colonel and a veteran of two previous ISS missions. Their crewmates, Japan's Hoshide and France's Pesquet, both have prior spaceflight experience as well.
Pesquet said he appreciated the chance to fly aboard the refurbished rocket booster that helps lift the capsule into the void. The weathered hardware still covered in soot from their prior flights, allowed him and his crew mates to "draw our initials" on the side of the vehicle.
"I don't know if [the writing] is gonna stick, but I've found it really cool," he said. 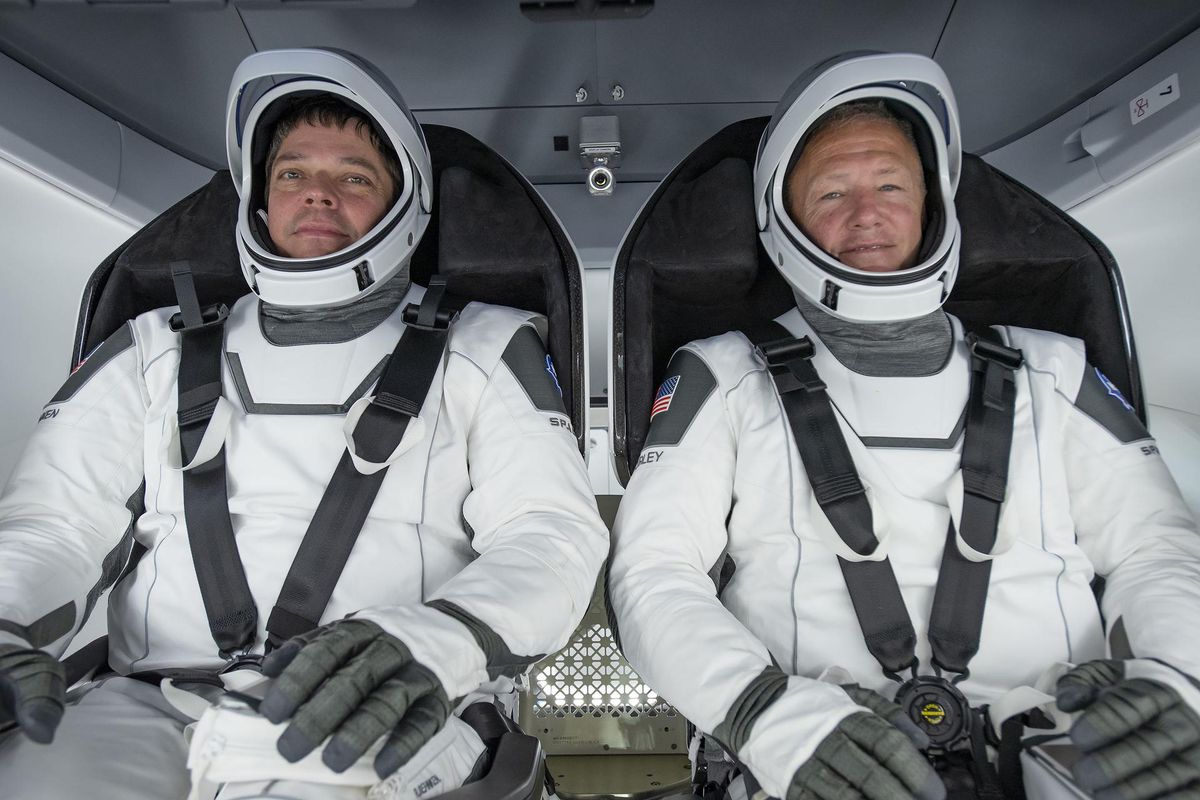 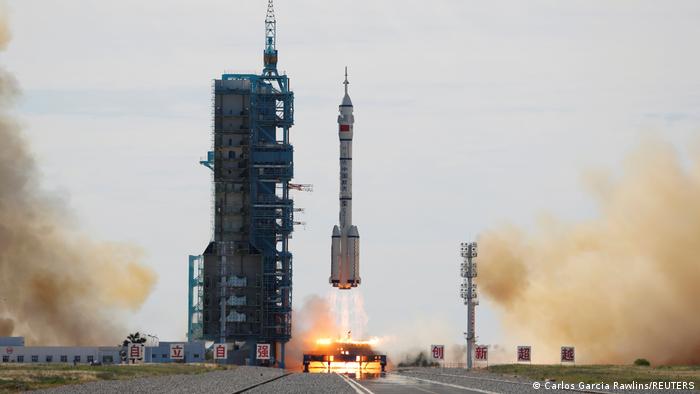