Ukraine War: Johnson Says If Putin Were A Woman He Would Not Have Invaded

Tesla Is Cutting About 200 Autopilot Jobs And Closing Office In San Mateo, California

European Markets Pull Back As Investors Weigh Up The Economic Outlook

7 Jobs Where Salaries Are Skyrocketing

It can pay to take a long view on salary expectations in your field.

In-demand jobs like software developers, physician assistants and online sales managers have seen substantial increases in median salaries in recent years, according to a new report from job site CareerCast.

“High salary growth rate and overall highest paying jobs are not necessarily one [and] the same,” CareerCast online content editor Kyle Kensing said in the report. “Careers with high entry-point wages do not necessarily grow considerably from median to upper wage-earning levels.” 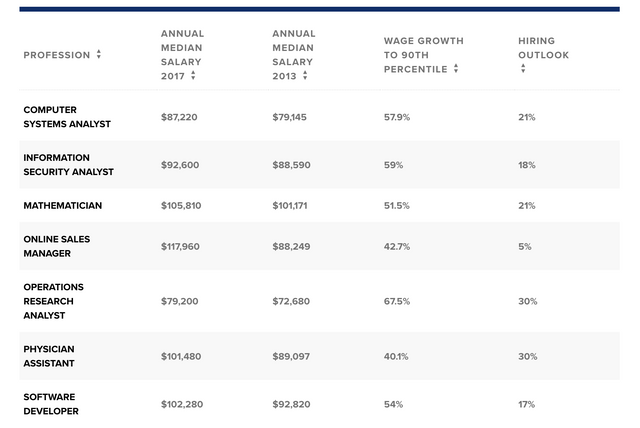 Of course, just because salaries are rising quickly in your field or role, doesn’t mean you’re poised to take advantage as a new or veteran employee.

“If you’re already employed at a company or organization, they are generally not going to give you substantial pay raises unless they think that they have to,” said business consultant Dorie Clark, author of “Entrepreneurial You.”

One way to get in on the rising-salary trend: Go back on the job hunt. You may find another opportunity worth taking or be able to leverage an offer into a raise with your current employer, Clark said.

“This is a tool you should use with discretion,” she warned. “You can’t go to your boss all the time with competing offers, to bang your salary higher.”

That won’t generate goodwill — and could backfire, ending up with you needing to take that job offer even if you’d rather remain in your current role.

Employees in a field with fast-rising salaries should also look at the field to see what skills and other qualifications are driving pay boosts, Clark said. Taking on a leadership role or obtaining a useful certification can easily become a talking point in a compensation conversation.

“A boss does not want to give you a raise because you think you deserve one,” Clark said. “You earn a raise by making yourself more valuable to the company.”

These Are The Most Expensive Places To Work Abroad In 2022

NATO : Turkey Finally Give Support Veto To Finland And Sweden To Join NATO

Apple And Google Advised To Remove TikTok From Their App Stores

This course is designed to prepare the learner to employ tools and strategies to retain the best talent for the organisation.

Professional Certificate Course in Understanding the Principles, Concepts, and Approaches to Leadership

The course enables the learner to utilize the principle, concepts and practical approaches to manage the team better and achieve efficiency and regular productivity.